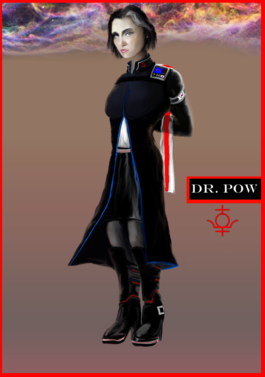 Born to a Korean father and a Chinese mother, Dr. Pamilia Pow showed great scientific curiosity as a young child.

Her grandmother, an authority in the field of bio-engineering, often brought Pamilia along to her research lab on board the Mobile Battle Fortress (MBF) Kuntafa. Together, they would study the mutations of Over-World organisms brought on by the effects of the Metal Rain.

By the time Pam had reached her teens, she had already become a leading bio-engineer in her own right, with a doctorate in bio-mechanical engineering.

By her late teens, the leadership of the Pacific Conference of Allied States learned that, with test animals in short supply, Dr. Pow had been performing unsanctioned experiments on the bodies of fallen soldiers.

Terranians, wary of humanity's over reliance of intrusive techno-augmentation, were against the experiments while China, Japan and several other member states argued in favor of anything that might give humanity an edge over the overwhelming Varentra threat enveloping the Earth.

Before the leadership could reach a verdict, it was discovered that the doctor had already commenced horrific and often excruciatingly painful experiments on severely wounded, but still living soldiers presumed dead by the public.

All such experiments on humans living or dead were immediately outlawed by all the Allied States. While many called for the death penalty for her debatably criminal actions, Dr. Pow, through cunning and cold intellect, instead became the Head of the P.C.A.S Science Division; Earth’s top scientific authority and member of the P.C.A.S Joint Chiefs of Staff.