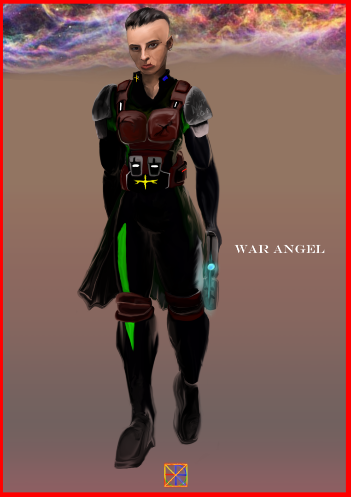 When Alina was a child. she looked up to Pamilia Pow as a surrogate sanice of her own. She was always fascinated by what she heard of Pow’s scientific exploits and became a loyal disciple of Terrania’s future Head of Science and Chairman of the PCAS R&D.

Despite being, as observed by Dr. Pow, “a natural scientist”, Alina demonstrated highly effective Over-World combat and survival skills, making her an easy Ranger candidate.

Alina found herself conflicted by her desire to stay by Pow’s side and the opportunity of being a Ranger and possibly working her way onto the Azon’s Dark Ranger unit “The Motherless.”

She was able to accomplish both by maintaining a “Science Officer” designation as a Ranger which carried over when she was promoted into the Dark Rangers. This meant her ultimate responsibility was to Terrania’s Science Division.

Alina’s advanced scientific knowledge made her invaluable in the field. She gained the callsign “War Angel” in part for her legendary ability to use her scientific knowledge to turn near-defeats into crushing battlefield victories. War Angel fulfilled her dream of being recruited into The Motherless, an assignment she maintained until Oblivion.