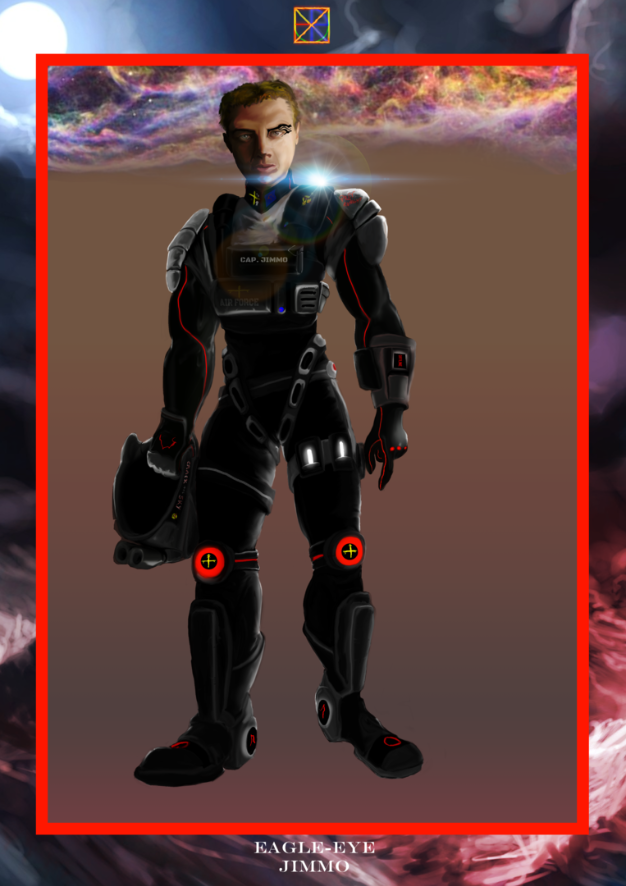 Young Jimmo’s favorite childhood stories were the ones his Sanice would tell of the Azons and their heroic deeds of yesteryear. He found them to be irresistibly inspirational legends.

Jimmo always had an insatiable thirst for adventure and his impulsiveness often landed him in trouble. His charismatic nature easily makes him an alpha male in any of his social groups, inspiring loyalty similar to that of his own to his Azon. He always stands up for his team.

Jimmo also demonstrated some of the fastest human reaction times ever recorded by the Pac-Con and was eagerly sought out by most of Terrania’s military and policing branches. Initially groomed by the Omega Dragoons Cavalry to join their ranks, Jimmo still managed to realize his dream of becoming a Terranian Air Force pilot.

Jimmo’s talent and spirit led him to join the legendary Birds of Prey squadron and become a Dragonfly pilot. He was quick to earn the respect  and loyalty of his squad, despite the frustration of his superiors who often chastised him for his disrespect of their authority. It did not take long for Terranians and even those from other Pac-Con States to recognize him as a hero for his action in numerous combat and death defying rescue operations.

When the Birds of Prey squadron was integrated with the Azon’s personal-guard, Colonel Jon-Azon hand picked Jimmo to be its captain. This was seen by many to be an act of defiance by the Azon  to the Terranian leadership that had seen the reshuffle as an opportunity to separate Jimmo from his fiercely defensive squad and punish him for his frequent disregard of their authority. Their actions only intensified Jimmo’s loyalty to the Azon and the his squad’s to him, further endearing him to Terranians and the greater PCAS that believed in the idea of the Azon.